Paranormal Activity In Antarctica Part-2 Welcomes You to the another World. If You had not read the previous part than this tale will be uninteresting to you, so you must read it CLICK HERE first then come to part 2.

So let’s continue we are terribly shaking with fear and some of us are in trauma, as they can’t believe a human can crawl on the wall like reptiles but soon one of the co-workers who is an assistant to Priest in Catholic Church came in to action ,and he moved towards the evil spirit and by reading some lines from the Bible, he controlled the situation and moved the evil spirit out of his body
We don’t sleep that night because of fear and we all discussed how to stay here in such condition. The assistant told us it’s not a good sign for our mission. It’s just the beginning and we are seeing some horrific things we never expected. He told us to talk with the higher authority to cancel the mission

Till now no harm is done to anybody so we decided to give it 2 more days before taking a final decision. Next day we went to the site where the research center is in progress and the team started working on their parts. The day was sunny and work was going in the flow. We all thought nothing will happen now and moved back to deck in the evening.
We all decided to sleep together in a single room that night after dinner. We ate our dinner and went to the room with a drink, it was a stormy cold night where the sun never sets. Assistant is telling us that this kind of evil spirits may come to take revenge because it wishes are not fulfilled or either died at a young age or some kind of attachment to the living world.
We were all gossiping about the matter and I went to pee with 2 guards as literally, I don’t want to take the risk. I was doing pee and suddenly someone holds my Penis and pressing it very hard, I screamed for help and when guards came I was ok. I told this to everyone but they all laughed at me and joked about the situation at least assistant believed me.

It was a snowy afternoon with dark clouds we are on the site forget to bring some instruments from the deck, so one of the workers sent to the deck to bring it, the deck was almost 2 km away from the site.
So two more people went with him to bring the instruments as nobody wants to stay alone at that places , after an hour they came with instruments and what we are seeing they are running very fast towards us with the instruments where one worker is running behind the other two, and when they came near a visible distance what we are seeing their face is so scary and it is looking like they want to kill us all. We are a group of big people so we controlled them and tied them with ropes on the site.

The Captain of the ship told us it won’t be a great idea to take them with us on the deck and we should inform this to the higher authorities about this happenings and we decided replied in affirmative but not for leaving those three on the site as they may get killed outside.
All of us went to the deck with those three tied with the rope and closed them in a room inside the deck. Until now we don’t know what is happening and where it gonna ends. We ate dinner and gave those three ghost face too

We had informed the authorities about the happenings. They told us to stay there only as they are sending a crew of 40 more people with doctors, Priest, cook, and other helpers as they can’t stop this expedition and can’t give an excuse to the president of such viral rumors of ghostly happenings.
We decided to stay strong and nothing happened for the next 4 days and those three people also get recovered with the help of Assistant and the crew is on the way to help us

We were going towards the site suddenly what are we seeing the place becomes complete dark , it was like a zero moon night in Antarctica and we can’t even see each other and time was 9:30 am in the morning and all of us are screaming with fear as we all gonna die and I somebody punched me on the face hard that my nose starts to bleed.
Many of them get beaten by some unknown force and all are bleeding and suddenly the light came in and we all can see each other, where somebody is down and crawling and most of them are bleeding like me. We decided not to stay a single minute at that place and move back, as what worst can happen the 40 people team also reached the place.
We reached the deck and half people from the 40 member team met us on the ship and we told them all the happenings and they told us don’t get worries we have Mr. Thomas and his professional team who are Ghostbusters and will take care of the situation.

We were discussing them only Mr. Thomas and his team entered the deck in Style in modern outfits and Mafia looks with some strange types of equipment. We all thought these jokers will save us and laughing mildly seeing each other
Mr. Thomas just came near me and told me you think we are the bunch of jokers who just came to Antarctica from the United Kingdom just to make you laugh. I was surprised how he knows that, is he reading my mind or what. I can’t see him straight in his eyes for that.
Immediately after the arrival of Mr. Thomas and his Ghostbusters team, they started the work to catch the culprit spirit , On the whole ship and deck they installed strange instruments and told us to don’t go outside a particular areas without their permission and told us all to meet at night on the upper deck after dinner completes..
And the Story Continues…….
Also, read : 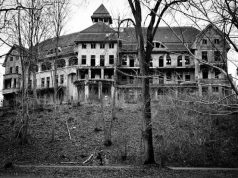