Who Is Creator Of Universe?

Hi all, as you have already read the title who is the creator of the Universe. We want to begin it with zero, as when I was in my teens, We always thought what is there if nothing was there. Means if nothing was there planets, Stars, darkness even Space. These questions come to me often and I think about it deeply by various logic and my own beliefs. 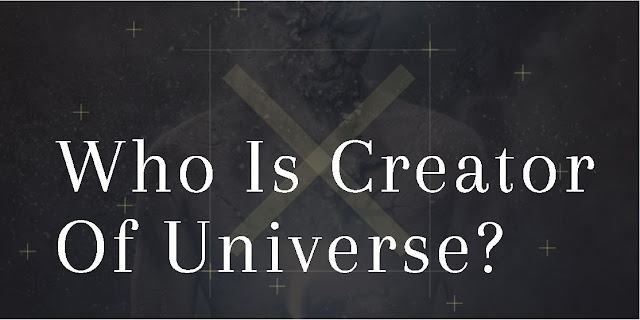 Who Is Creator Of Universe?: Are We Living In God’s Dream??

But as we all know even Scientists are searching this and had put the light in past on this topic but even they had not succeeded
Now the question also arises that if nothing was there like I had mentioned above, even I was not there who is asking the question to himself, then what are possible assumptions or theory behind it.
As we all know even we say that Space was not their , if their is vaccuum means it should also be a part of space
Example : If we create a Vacuum in a steel bottle like their no air ,no sound but even than Space will be there.
So what i found after my 1000s logic that this question is not impossible to answer but also than there can be many probabilites.
Here is my answer ” If nothing was there like if Me was not born , i was not their to ask the question . In a simple term, everything exists because of my existence.
Now put yourself in the same example and you can easily connect with me and agree to some point.
Now the another question is ” WHO IS CREATOR OF UNIVERSE” which again is solved here as we can think sharply as this space is infinite above our reach or we can never find where it ends.
We as human beings living on the earth which is a part of the Solar System which lies in the galaxy which resides in the universe and there are infinite galaxies having different Solar System and infinite Universe exist in Space , you can called them Multiverse in scientific language.
My answer for this is “SPACE IS CREATOR OF UNIVERSE” because everything exist in space whether it is darkness or light . And space is infinite, Every thing happens within space.
Right now you are reading this article or post while breathing and concentrating on your mobile screen or any device which runs on electricity or needs charging, and all this things right now happening in space.
From A to  Z of World everything exist in Space. If everything exist in space ,you can say we all are in space or Space is God who created us within himself.
Don’t question why We got oxygen, food, love, hatred etc. because everything exists in space. This is my assumption of having Space as my creator.
Also, you can put your thoughts on the same in the comment box and put some more focus on this topic.